The Many Faces of Gifted: Devyn

Every gifted person has a unique story. The following story is part of a series of posts depicting the many faces of gifted by highlighting gifted children and adults we have found through IEA programs. Devyn is a high school junior and a Caroline D. Bradley Scholar. The Caroline D. Bradley Scholarship program awards highly gifted students with a four-year scholarship to a high school that best fits their individual, intellectual and personal needs. Here, Devyn talks about the many factors that influenced her educational path. 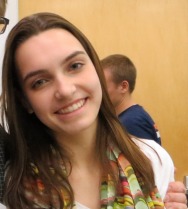 In my application for the Caroline D. Bradley Scholarship, I described myself with the personal characteristic of “being extremely curious and having a thirst for knowledge.” My seventh grade self wasn’t too picky about the things I learned; I devoured it all. I was a historian, a scientist, a pianist, a flutist, an actress, a linguist, a tap dancer… The list went on and on.

As I moved into high school and my extra-curricular activities became more demanding, I realized that I had to narrow my focus. I still possessed a wild curiosity and an insatiable desire to learn, but I determined that my real interest lay in our ever-changing global society: diplomacy, politics, foreign languages, and world history. I have pursued these subjects to their fullest both in my high school and out in the world.

One of the major reasons behind this realization derived from my decision to study Latin in high school. The Latin program at my school was exceptional, and I soon became an avid classicist. I attended both state and national Latin conventions, where I met students from around the country who were just as enthusiastic about declining nouns, conjugating verbs, and reciting Ciceronian oratories as I was. I participated in Certamen, a quiz bowl competition with a classics twist, and my Illinois state team placed in the top five in the country. At this year’s state convention in February, I decided to take a more active role in Illinois Latin, and I became a student member of the Illinois Junior Classical League Board. I was very excited to have the opportunity to lead the Illinois delegation to nationals at the University of Nevada, Las Vegas this July.

The wide variety of student organizations that my high school has to offer also helped me determine my areas of interest. As a freshman, I became a member of my school’s Model United Nations team, seizing the opportunity to experience global diplomacy firsthand. Last year, I helped new members grow in their knowledge of Model UN conferences and parliamentary procedure. I also represented the sophomore class on my school’s Student Council and coordinated numerous events ranging from dances to a “State of the School” address. I am eager to begin my next term as council treasurer this year. These two extra-curricular activities helped me realize my affinity for leadership and government.

The final piece to the puzzle of my identity came with a rather spontaneous decision to study a language completely foreign to me and to most other Americans: Arabic. In the summer of 2012, I decided to attend a month-long intensive Arabic immersion program run by the Middlebury-Monterey Language Academy. I knew not one word in Arabic; I couldn’t even recognize a single letter. My family and friends were surprised, to say the least, at my choice of a summer camp, but I was ready for the challenge. I emerged from a hot July in Ohio hooked on the Arab language and culture. I was able to communicate in Arabic, fluently read and write the alphabet, and even prepare some traditional Arab foods. Until that summer, I never really knew what I wanted to do with my life; I had never identified that one thing that I absolutely loved. But in that month, I knew I had found it.

Since my school does not offer Arabic, over the past year, I have taken private lessons, which have been generously funded by my CDB Scholarship. I am thrilled every time I am able to recognize words through a shop window or search through Al-Jazeera Online and understand the headlines. Through my studies, I have come to appreciate the rich and diverse culture of the Arabic-speaking world, and I am very interested in helping to bridge the cultural divide that has separated the West and the Middle East for so many years. To this end, I spent a month in Jordan this summer, participating in a program that encompasses language study, leadership, cultural activities, tourism, and community service. I enjoyed the chance to speak Arabic 24/7, mentor young Jordanian students, and visit historically important sites like Petra and the River Jordan. I hope that this trip was just the first of many to the Arab World as I become more involved in diplomacy and international affairs.

I plan to continue to hone my leadership skills and increase my global outlook as I move through high school and into college. I am very thankful to have IEA as a partner and guide along my journey. 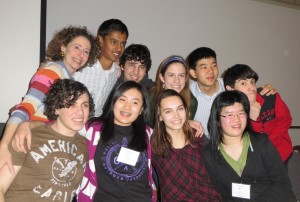 Devyn and the 2010 Class of Caroline D. Bradley Scholars at the 2013 Bradley Seminar