Reflections on My International SJWP trip to Stockholm

2011 Caroline D. Bradley Scholar and then high school freshman Anirudh was selected as the winner of the United States Stockholm Junior Water Prize (SJWP), “the world’s most prestigious award for water-related science and technology projects.” Anirudh recently traveled to Stockholm, Sweden to represent the U.S. at the International SJWP competition with his project, “Use of Sulfidation as a Novel Method for Reducing the Toxicity of Silver Nanoparticle Pollution.”

As the winner of U.S. Stockholm Junior Water Prize (SJWP) competition, I had the honor of representing the United States at the international SJWP competition held in Stockholm, Sweden in the first week of September. I am immensely grateful to Water Environment Federation (WEF) for giving me this fantastic opportunity. The overall experience, both inside and outside the competition, was incredibly enriching and somewhat hard to encapsulate in words, but I will try.

The days leading up to the competition were somewhat frenzied. Ms. Stevi Hunt-Cottrell of WEF took care of all the logistics and also supported me tirelessly with the minutest details on requirements for SJWP poster, dress codes and many other important things I would possibly not have thought of. As I sat on the long flight, I was excited and apprehensive at the same time. I had the tremendous responsibility of doing a good job of representing the U.S. in a global competition in a sea of worthy competitors from exotic places all over the world! I was unsure if I could relate to them, or communicate with them effectively, given the cultural and language barriers.

Soon after I landed in the Stockholm airport, I happened to meet the students from Netherlands and France. Almost immediately my initial fears were proven to be unfounded. All of them spoke fluent English and were so easy to talk to. Not only did we have similar interests in science and water research, we connected on other things such as soccer. This became a recurring theme as I met the rest of the group later. I made many good friends during that short week – people I would always stay in touch with. I still remember how seven of my closest friends stayed up until 4:00 AM on the last day to see me off to the airport. I was extremely touched that they all sacrificed their sleep to say good-bye to me.

END_OF_DOCUMENT_TOKEN_TO_BE_REPLACED

Posted in The Many Faces of Gifted

A 16 Year Old’s Guide to Colleges

Lisa is the mother of 3 gifted children and lives outside of San Francisco.

Be sure to check out the first part of Lisa’s college road trip journey! 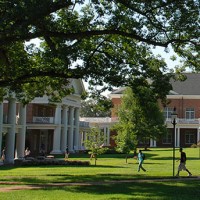 We were 5 minutes into the student-led tour and I knew the school wasn’t the right place for my son. Our guide led us down the hallway of a beautiful colonial building. The walls were lined with cork board and sheets of brightly colored paper framing announcements and pictures of professors and administrators. “No, no, no,” I thought. “He’s going to hate this.”

I was trying to think like a 16 year old boy, or at least, my 16 year old boy. I had promised myself that I would allow him to set his own criteria when evaluating colleges. I admired how he navigated class selection, extracurricular activities and the work/life balance in his high school. I would not substitute my values for his now that he was looking for a college. So I tried to see the college through my son’s eyes.

It turns out that I was right—he hated the school. While the environment looked warm and nurturing to me, he felt smothered by the level of support suggested by the cheerfully decorated hallway and confirmed by our tour guide. We made a hasty exit at the tour’s end, skipping the information session and catching an earlier train to New York City. On the way out, my son said that he was really glad we made the trip. “I didn’t know if I would recognize a bad fit if I saw one. Now I know. I can trust my instincts.”

Thus began my son’s search for a methodology to assess the colleges we were visiting. What follows are his indicators of college excellence:

My son is on a quest for autonomy. He wants support at college to be available and encouraged, but not conspicuous. He disapproves of schools with multiple student committees tasked to help freshmen with everything from writing to public speaking skills. If he wants help, he will ask his professor. Jesuit priests in your dorm? Minus 5 points. A campus policy that encourages students to ask professors to lunch and gives them the funds to do it? Plus 10 points.
END_OF_DOCUMENT_TOKEN_TO_BE_REPLACED

Posted in Stories of Gifted

Lisa is the mother of 3 gifted children and lives outside of San Francisco.

It’s the only fun part of the college application process: the college trip. It’s the chance for your child to dream before the harsh realities of test scores, class rank and GPAs hit. Best of all, parents are active participants. We get to be accomplices to the dream worlds our children are imagining.

Three years ago, I eagerly anticipated bonding with my oldest son on our whirlwind tour of 6 colleges in the east and one in the Midwest. I memorialized the trip with pictures of him scraping the snow off the windshield of our rented car, waking up with bed head and sampling cannoli in Boston. He was not amused. The defining moment of our trip happened during dinner midway into the week.

“I haven’t seen anyone in so long,” he said.

I not only wasn’t bonding with him, I wasn’t even someone.

END_OF_DOCUMENT_TOKEN_TO_BE_REPLACED

Posted in Stories of Gifted

April 2 is International Children’s Book Day, so we thought it would be fun to highlight some great children’s books for gifted kids. Here are five of our picks:

Harry Potter series by J.K. Rowling
Hermione is clearly gifted, as evidenced by her perpetual thirst for knowledge, heightened sense of justice, advanced academic acceleration, adult-like wisdom, and sharp intuition. The series also appeals strongly to kids who feel “different” and those with imaginational overexcitabilities.